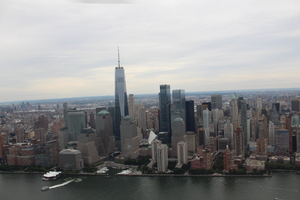 
(Scroll down for image gallery)

I have visited several parts of America for work and holidays, but I had never ventured to the ‘Big Apple’. It was always one of the key destinations that I wanted to visit, with my ultimate desire, as an ex-performer, to see a Broadway show. This month my desire was fulfilled! 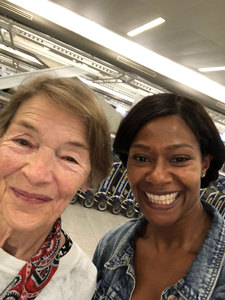 I’m not one to be star struck but I never thought I’d meet a famous ex-Labour MP and actress at the airport. It was a real pleasure to talk to her and to discover she is still working at the young age of 82, and still looks fabulous!

Arriving in the early evening on Labour Day (Monday 3rd September) in NYC, my friendly taxi driver chatted about the festivals that had taken place that day, (as there was, yes you guessed it, traffic). Pity I missed out, especially the West Indian Parade, as it is said to be a spectacular array of vibrant colours, music and great food. Luckily for me, the journey to the hotel was not too arduous.

The Moxy hotel was everything I wanted it to be with its cool, vibrant, funky and on trend vibe. Especially with the rooftop terrace bar and nightclub, that has the Empire State building as its backdrop. Entrance to the roof terrace is free to hotel guests, but ID is needed, regardless of age.

Located on 7th Avenue NYC, the hotel is a 3 – 5-minute walk from Times Square and just around the corner from Macy’s department store. The Moxy hotel is part of the Marriott group chain but comes under their boutique range. If you’re ‘not dead yet’, then this is a fabulous hotel to stay in! It’s great on the space-saving, with retro furniture and accessories. They even provide ear plugs, should you wish to have that early night and want to shut out the hip tunes being played on the terrace. The staff reflect the hotel, they’re cool and helpful, using their iPads and laptops to give the latest answer to any queries.

The hotel provided daily activities to participate in, so me, loving dance, I took part in the Banana Skirt Productions – lip hop class. This was fun, energetic but exhausting, even for little old me. LOL, I forgot that I’m not 24 anymore. However, to be fair, there was a good mix of ages in the class, so I didn’t feel that bad. 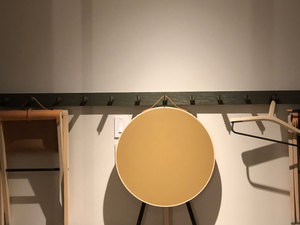 Getting acquainted with New York – Tours of the City

To get yourself orientated with the grid system of the NYC streets, venture on the hop on hop off city tour bus. They cover the major landmarks of Upper East Side/Lower East Side, Brooklyn, Harlem and Liberty Island. I decided to buy a 48-hour travel pass, which was good value for money, as it included a free pass to MOMA (Museum of Modern Art) and the trip to Liberty Island. My tip is to use the earphones provided, so you don’t have to be burdened with the overzealous tour guides.

On the hop-on, hop off tour, a must-see is the Ground Zero memorial pool. It’s the most beautiful, melancholy, peaceful, surreal place I have been to. Each person who died in the twin towers, their name is engraved around the site. A white rose is placed on the name of the deceased when it’s their birthday, which takes your breath away with emotion.

Sex and the City

On a lighter note, I highly recommend the Sex and the City tour, especially if you’re a fan like me. The tour is value for money and hilarious, as you’re with a bunch of like-minded women and even some men thrown in for good measure. We were taken to all the major haunts, such as O’Neil’s (Aidan’s bar), Carrie’s apartment steps, Pleasure Chest shop, Cipriani (ladies luncheon restaurant) which were filmed for the series. The well informed, riotous tour guide treated us to many TV clips of the show, corresponding to the series’ landmarks that we visited. I even saw ‘Carrie Dragshaw’ who was being interviewed. There are other film-based tours such as the Classic Movie tour - wish I’d had enough time to have done that.

Getting around on the Metro was brilliant too. The stories of don’t travel on the metro in New York, it’s not safe, were a myth to me. I found it to be clean, spacious, and you could actually get a seat, also the people were friendly.
Taking a taxi is much cheaper than taking an Uber, especially in bad weather. However, it is true what they say; it is virtually near impossible to get a taxi when it is raining, so book that Uber if you’re really desperate to get to your destination.

Now if you’re feeling really plush and want to do a once in a lifetime event – then take a helicopter ride over the city. This ticked off one of my bucket list of things to do - if I could travel this way every day I would! It was surreal, exciting, awesome and exhilarating to see the magnificent landmarks of Manhattan from a bird’s eye view. Although I was sitting at the back (only tiny people weighing less than 58 kilos can sit in the front as the helicopter has to be balanced on take-off), I could still get those all-important camera shots and footage. The cost is $289 per person, extravagant but so worth it!

Well, I’m not going to lie. Eating out is expensive, more so than London or Paris. A Starbucks coffee will cost you the equivalent of £4. Breakfast for two, average spend $40 and that was for a basic omelette, crispy bacon, coffee and orange juice.

As for dinner, I was highly disappointed with the quality of the food, especially the Red Lobster Restaurant, Times Square - avoid! It’s overly priced, the lobster is rubbery, the salad wilted, the only good thing was the service from the waiter and the mocktail.

Smith and Wollensky restaurant 3rd Avenue– New York’s institution restaurant was equally disappointing and again extortionately priced - $400 for two and that did not include dessert or even a bottle of champagne. If you book a table for 8.00pm in advance, you’d expect to be seated and eating at least 15 minutes later. Unfortunately, the wait was an hour to be seated at a table and no nibbles or bread was offered to make up for the time spent waiting. Not funny.

Tommy Bahama’s restaurant, 5th Avenue was the best for me and a decent price. Staff were brilliant, very chatty and aimed to please. The quality of the food was very good, and cooked to perfection, I’d definitely go again.

Soho House New York 9th Avenue was a treat, as I met up with some friends from Dallas. The vibe reminded me of Soho House White City, London, with its rooftop terrace and swimming pool. If you’re taking in the sites, you may get to see one or two famous people, the legendary supermodel Cindy Crawford being one of them outside Soho House.

There are so many shows to see but, having seen all the major shows in London, I wanted to try something a little different and opted for Summer the musical. It was a portrayal of the life of Donna Summer: if you like her music, then it’s a must-see. The actress who plays Donna is great and does her songs justice. The dancing is great too! My only criticism is of the set design which was quite minimal. I would also say, don’t compare it to Tina the musical, as you’d be disappointed.


If you enjoy the occasional cheeky cigar, then I suggest you visit Martinez Handmade Cigars 29th Street. It’s a quaint little shop, where you can watch the cigars being handmade by the friendly, hospitable family members. The tradition and technique of the rolling is passed down from generation to generation. These men are experts in their field. The public is encouraged to come in, sit down and enjoy their cigars, with cool ambient South American sounds being played in the background, and watch them at work. If you like what you enjoyed, then you can purchase or order online for them to be shipped over to your home country.

Confessions of a Shopaholic…

Shopping for me, in New York was non-descript. Saks on 5th Avenue cannot compare to Harrods or Selfridges in London, so give it a wide berth. Macy’s is not my ideal store either; however, it is very good for purchasing those sale items, such as travel luggage and Levi jeans. If I had to recommend where to shop, then I’d say go to Europe: Milan, Paris or Barcelona.

I’m glad I’ve finally been to New York. Would I go back? Yes! For there was so much I didn’t get a chance to see; like the Museums, going up to the top of Empire State building, seeing Staten Island, Harlem, Apollo Theatre and of course, the Hamptons… but that’s another story!