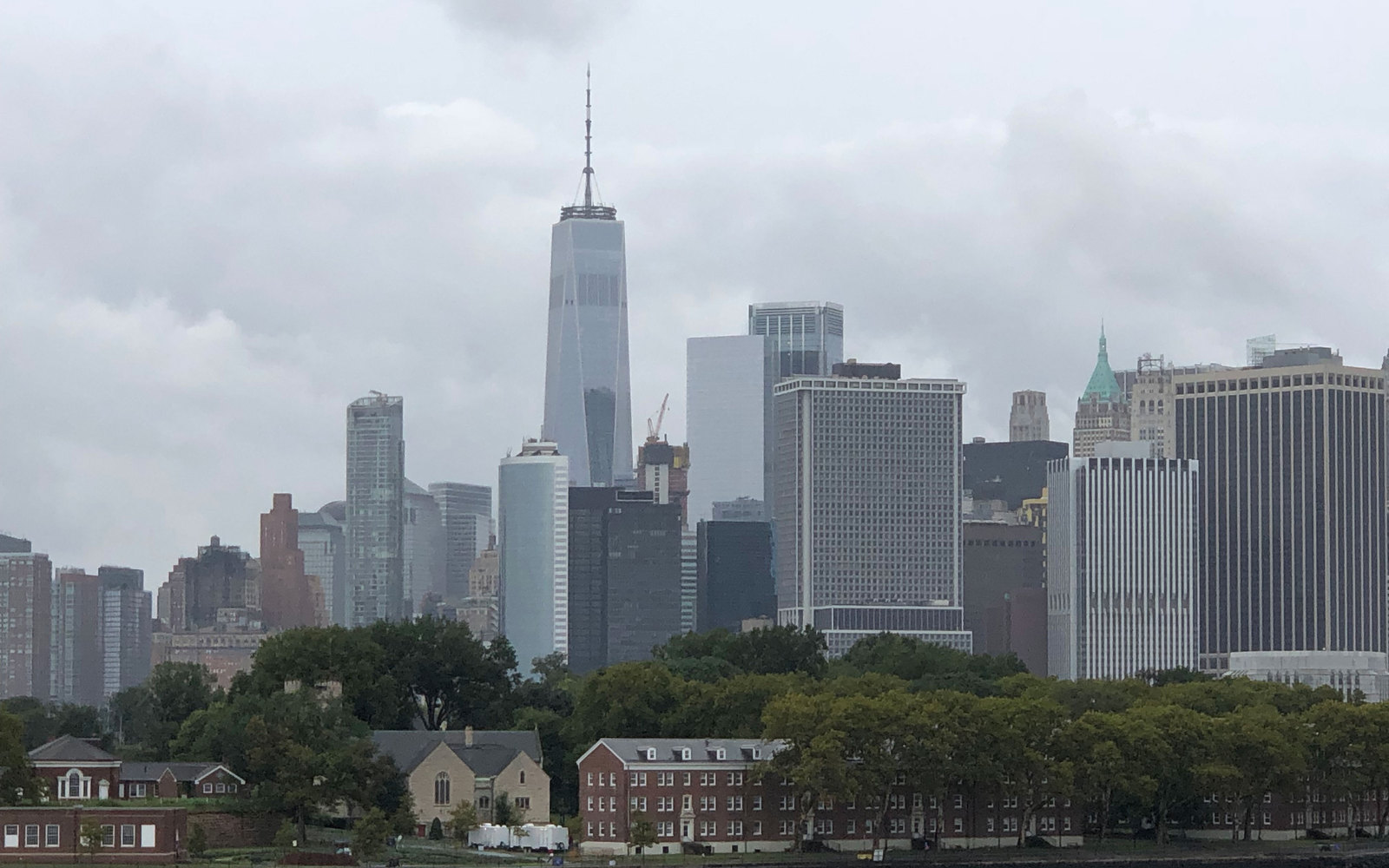 Say goodbye to New York on the QM2 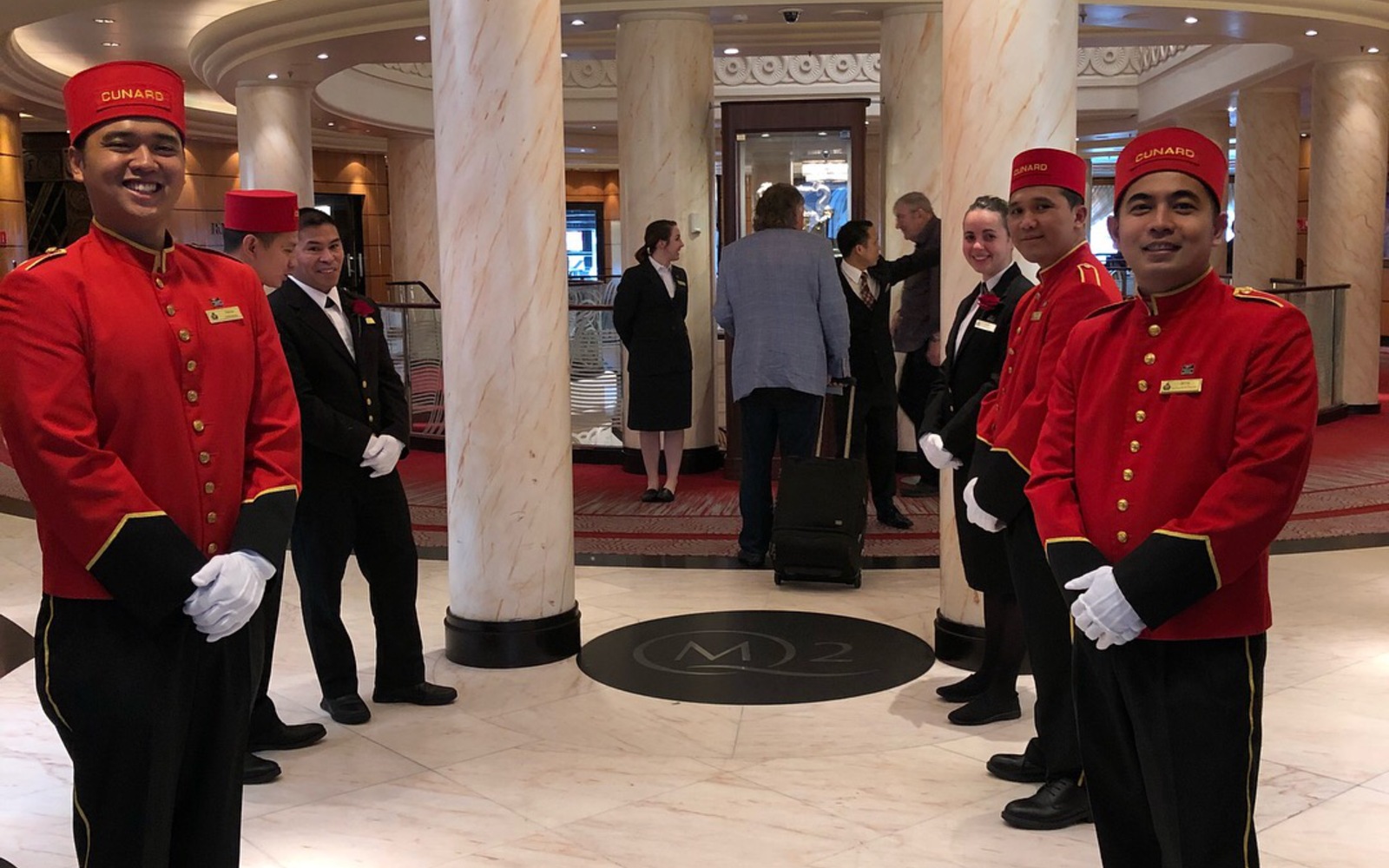 Welcome on board QM2 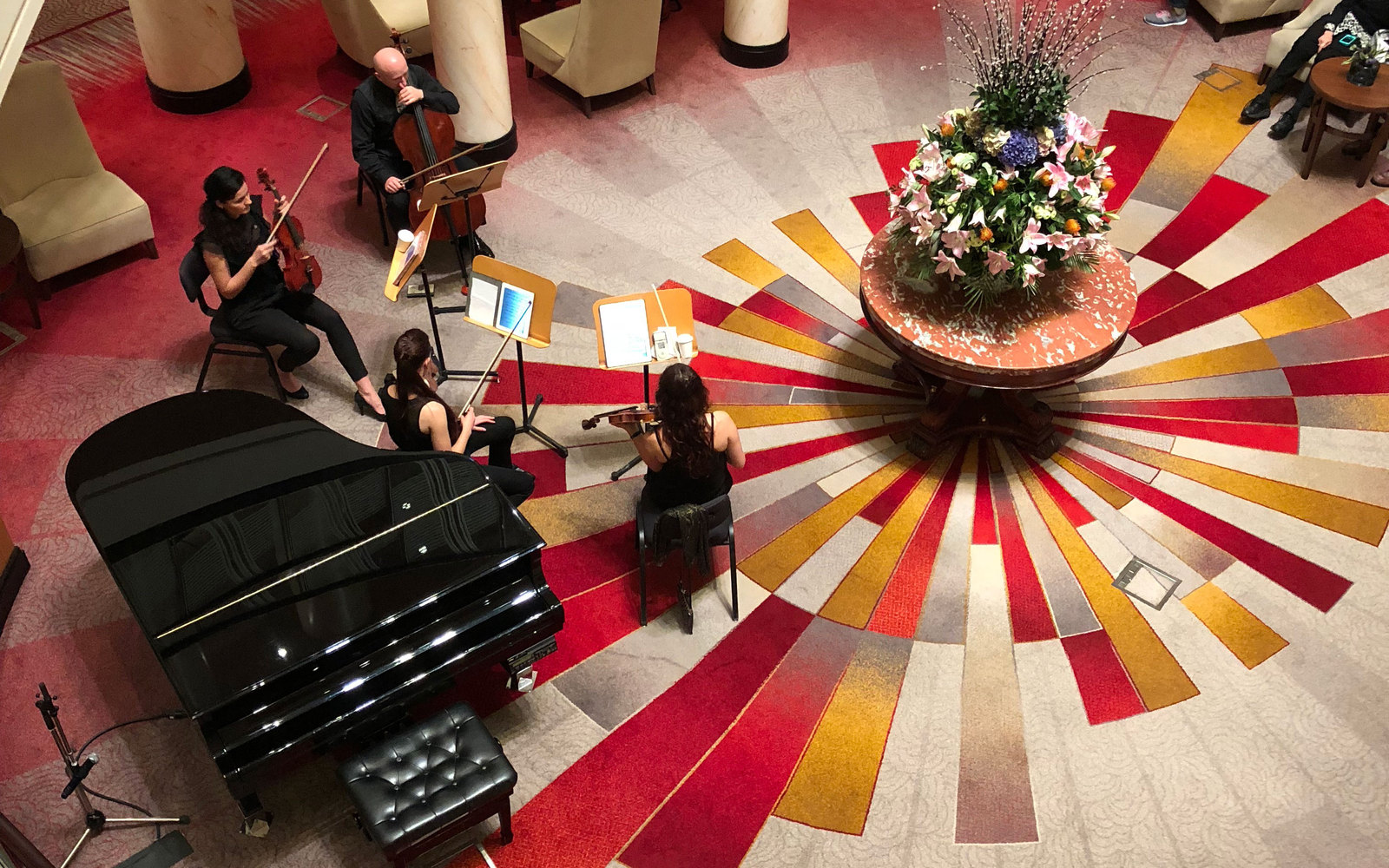 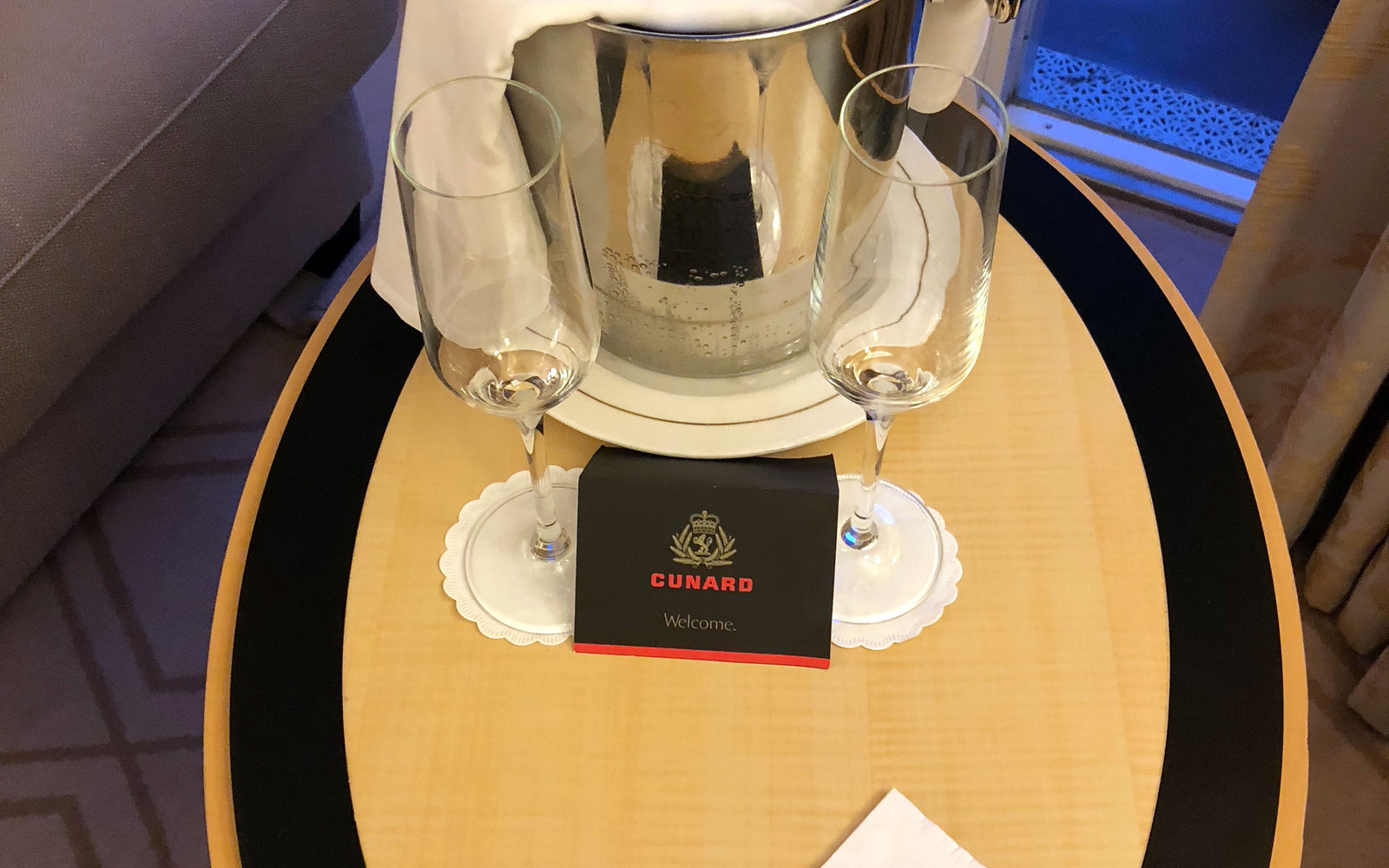 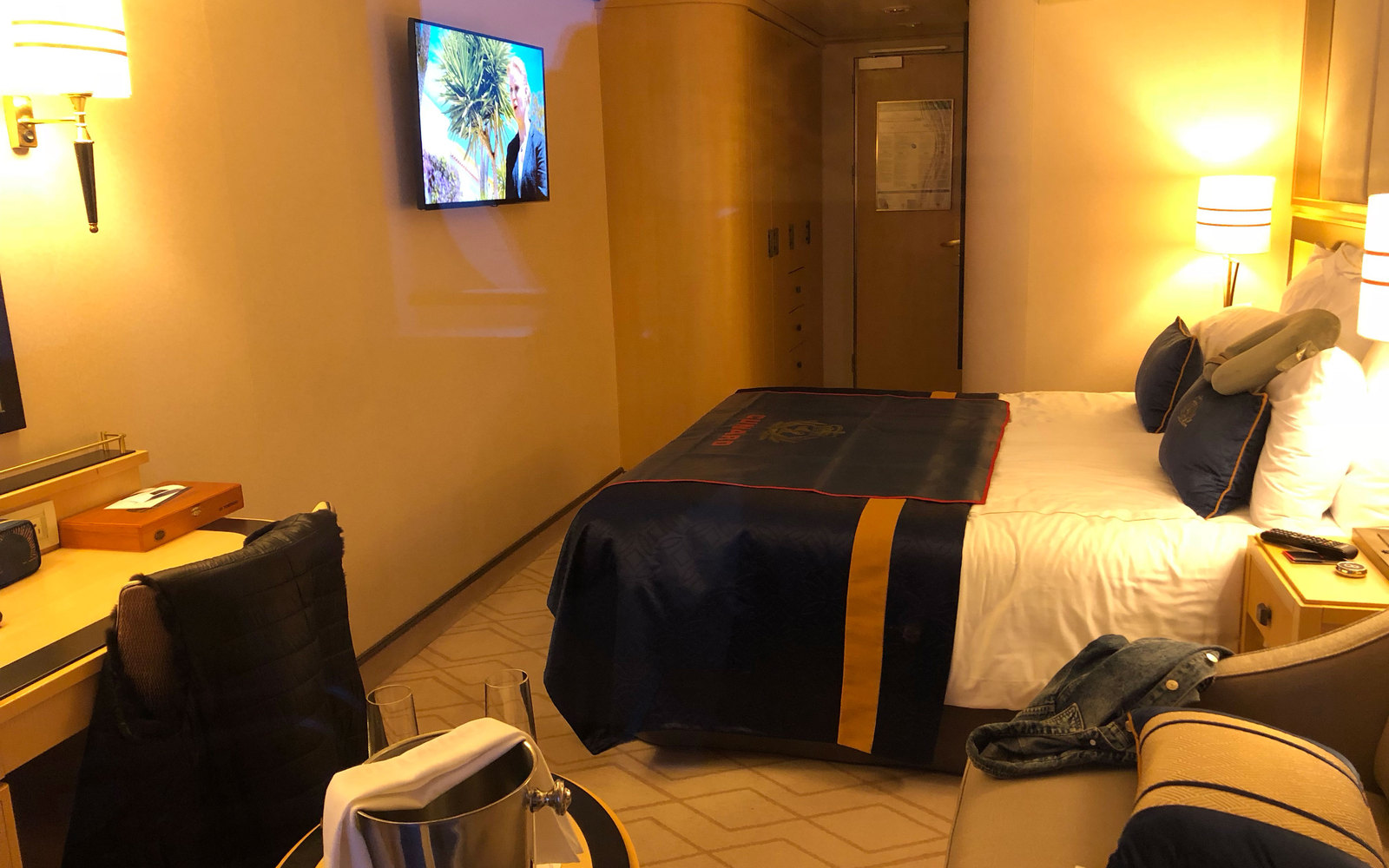 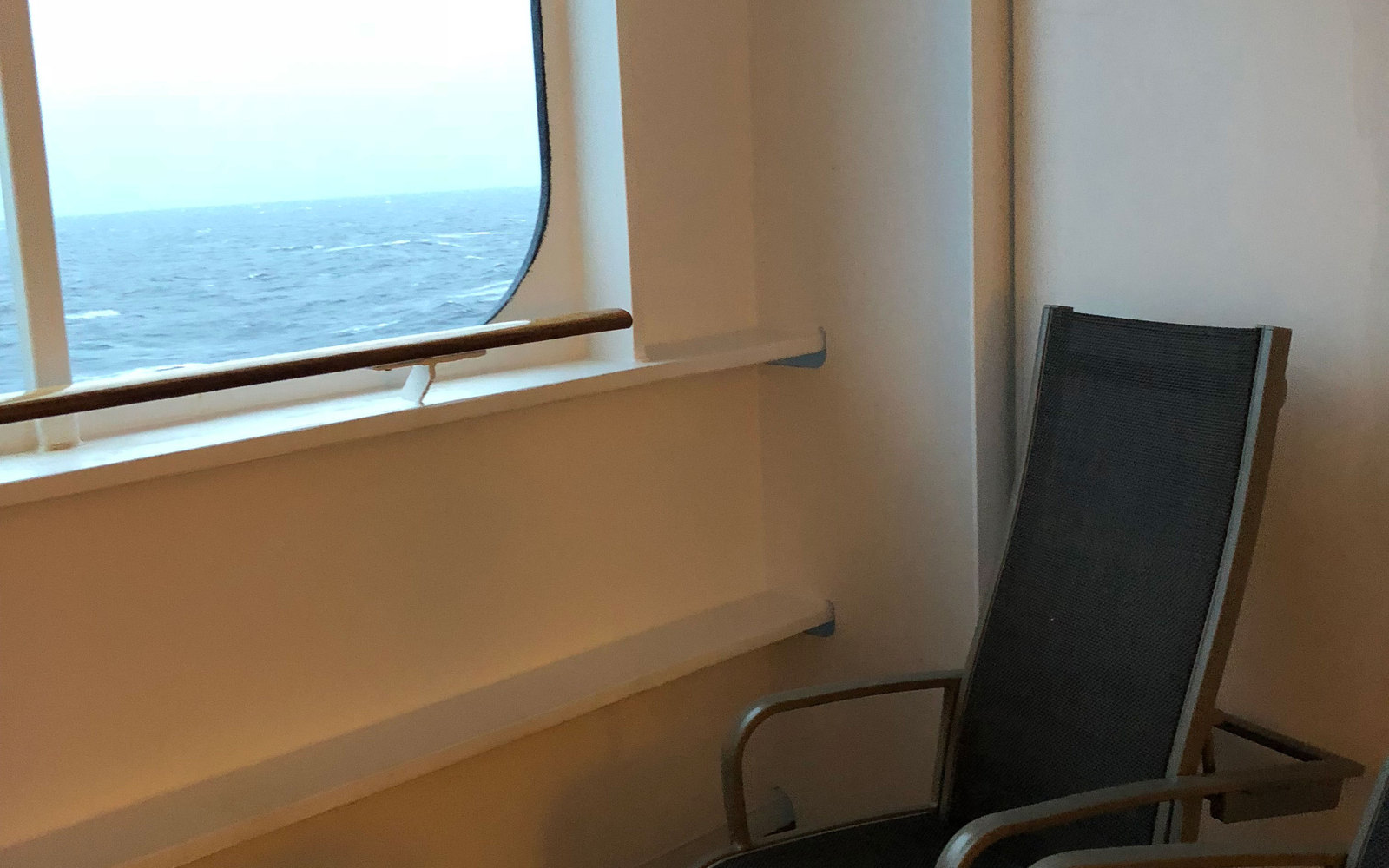 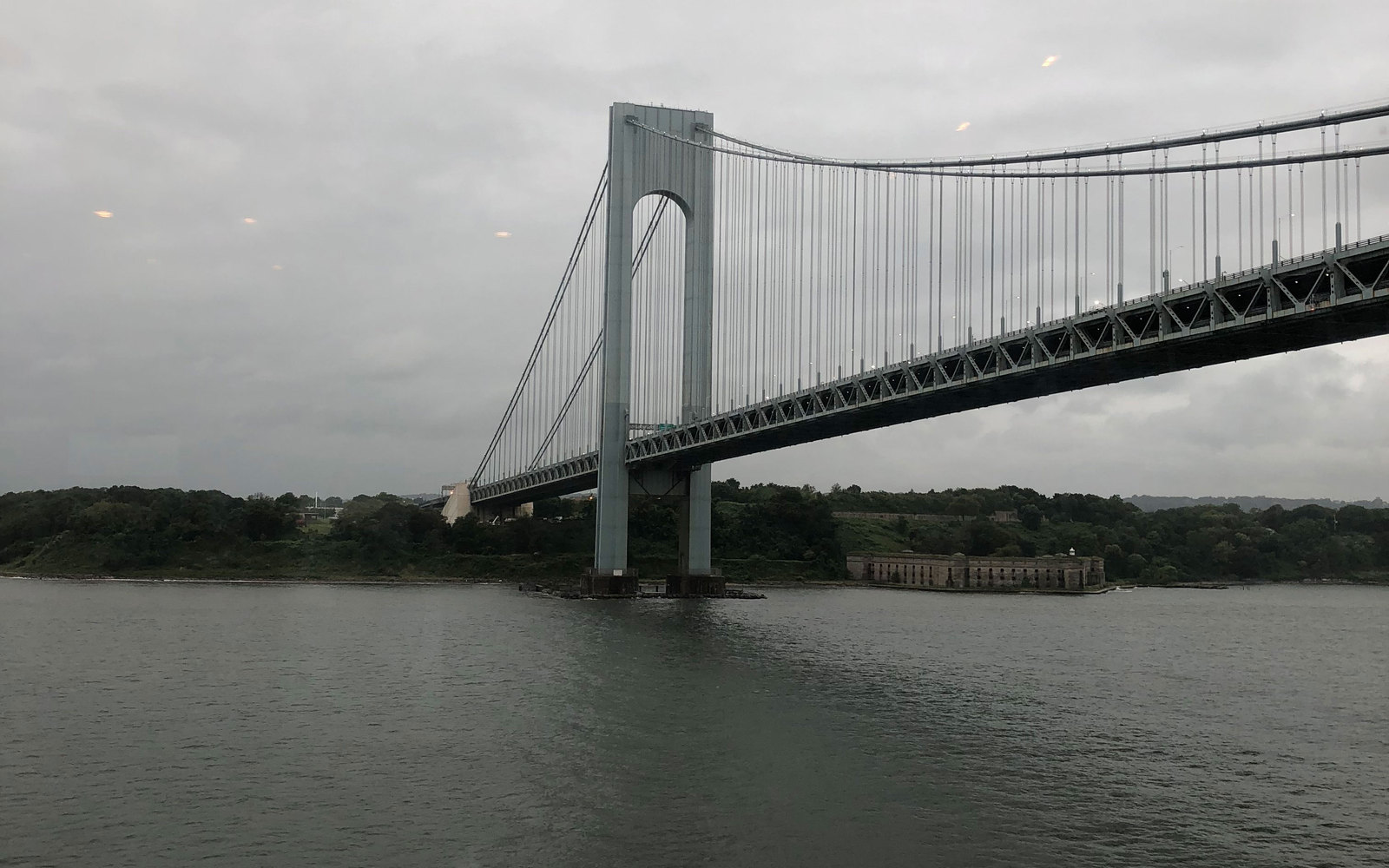 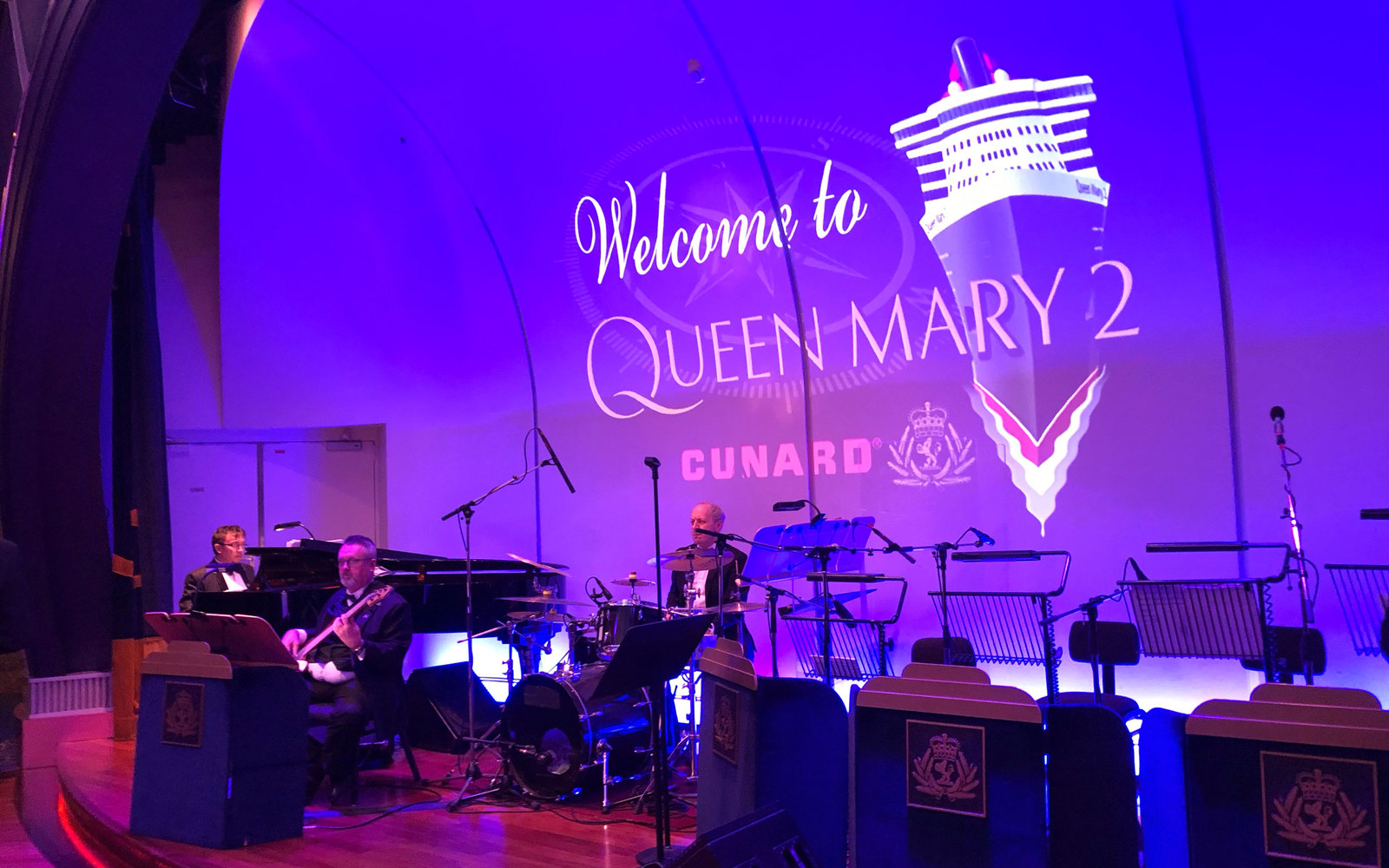 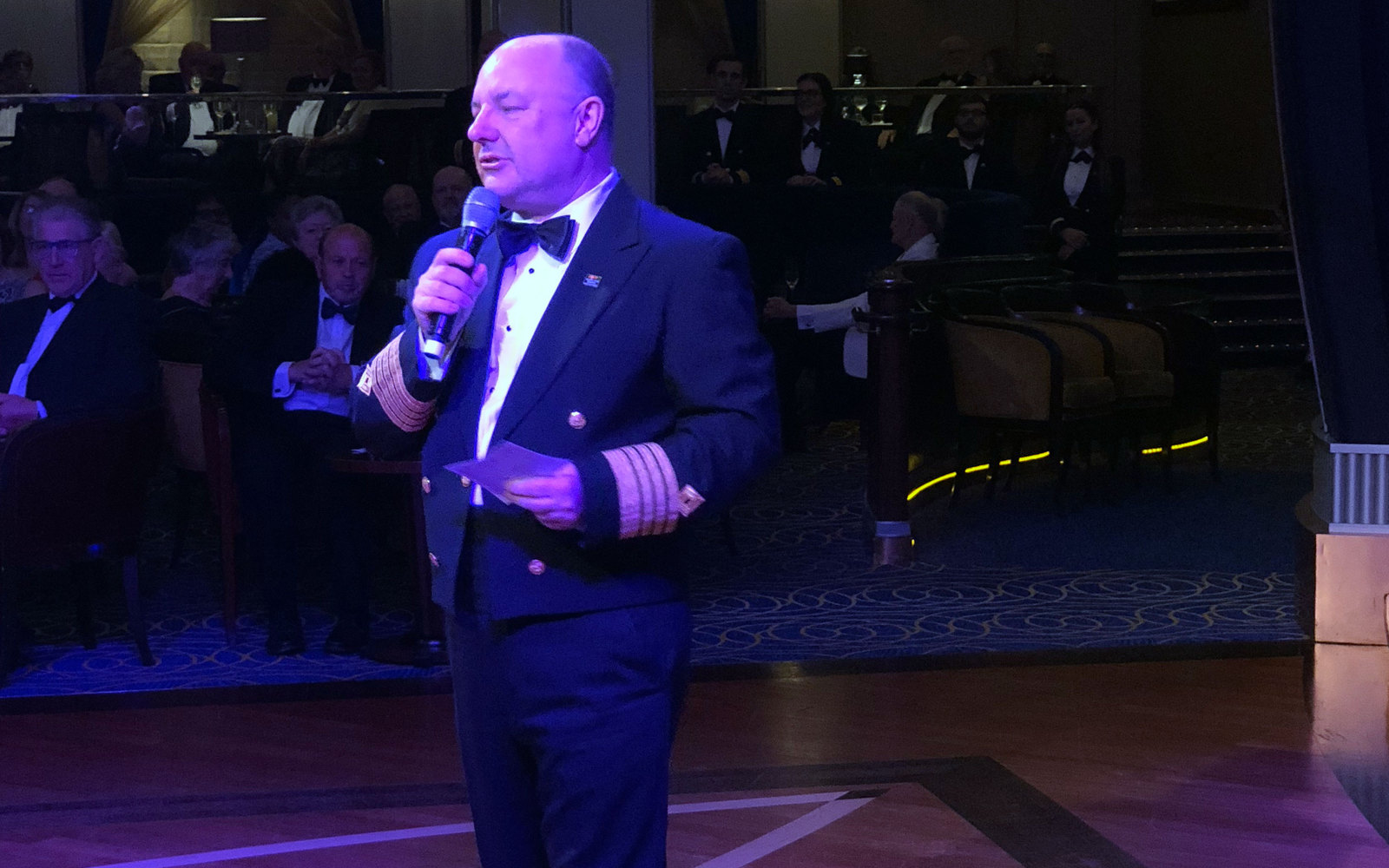 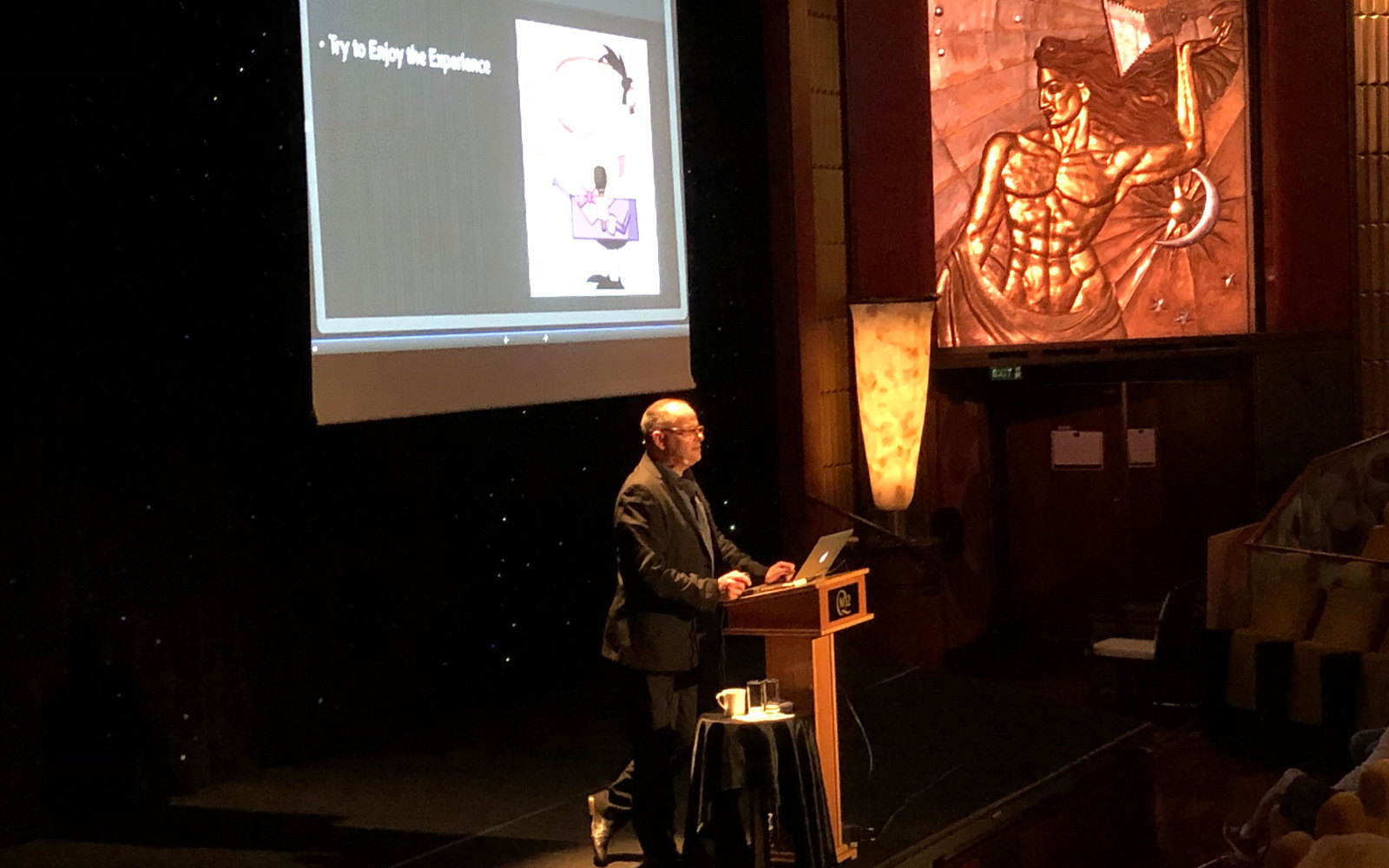 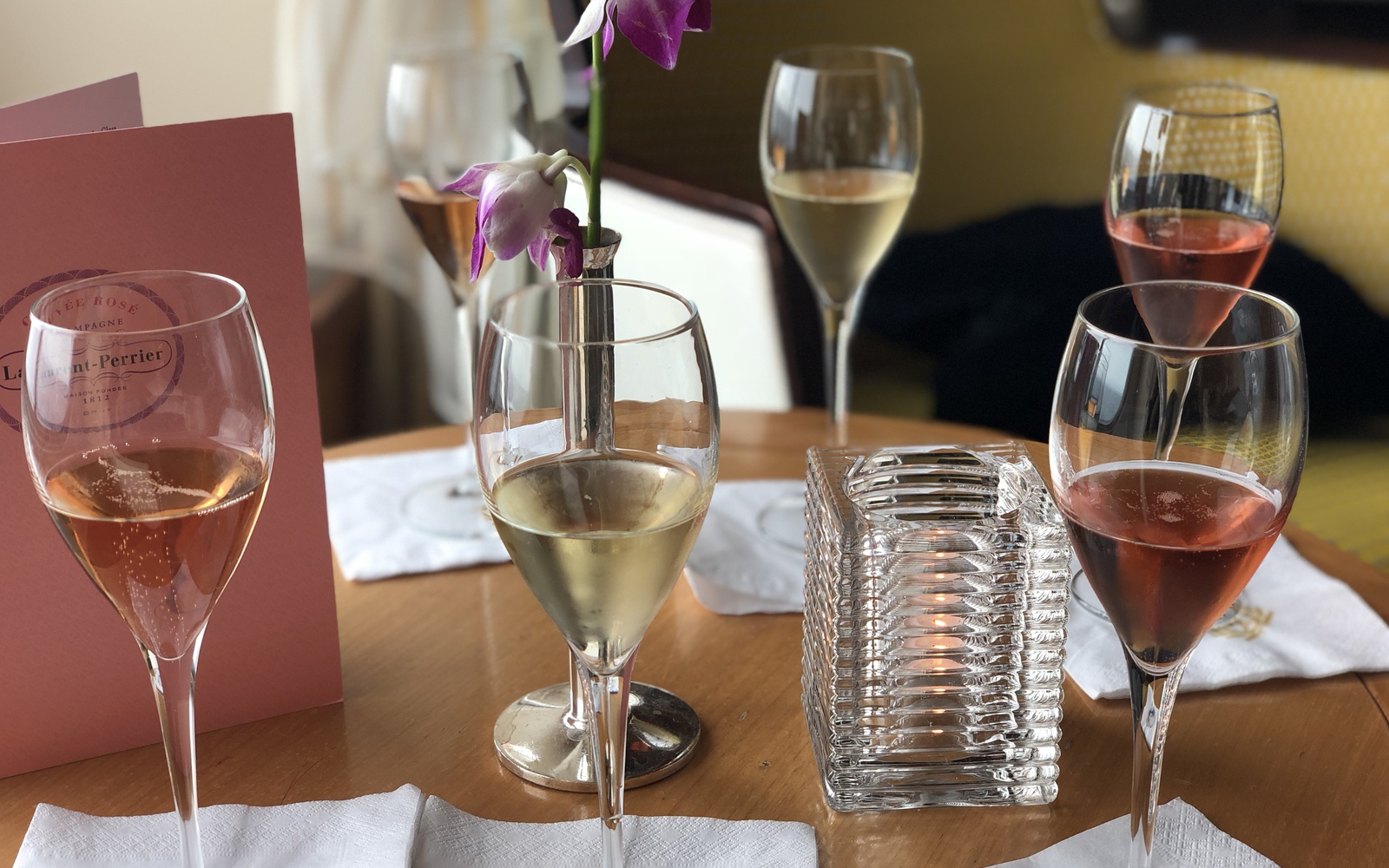 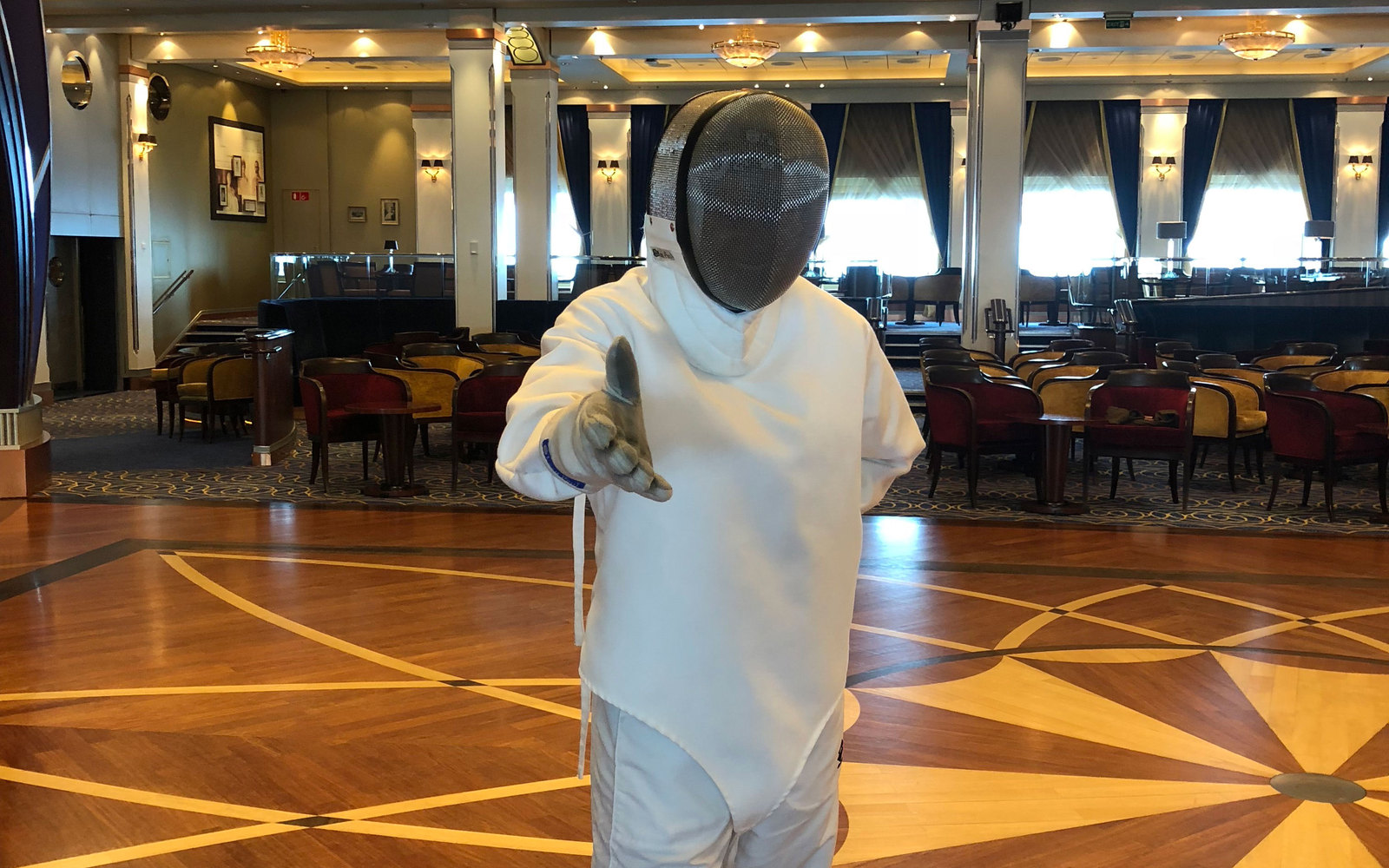 The dress up - Fencing Style

All aboard the Queen Mary 2. 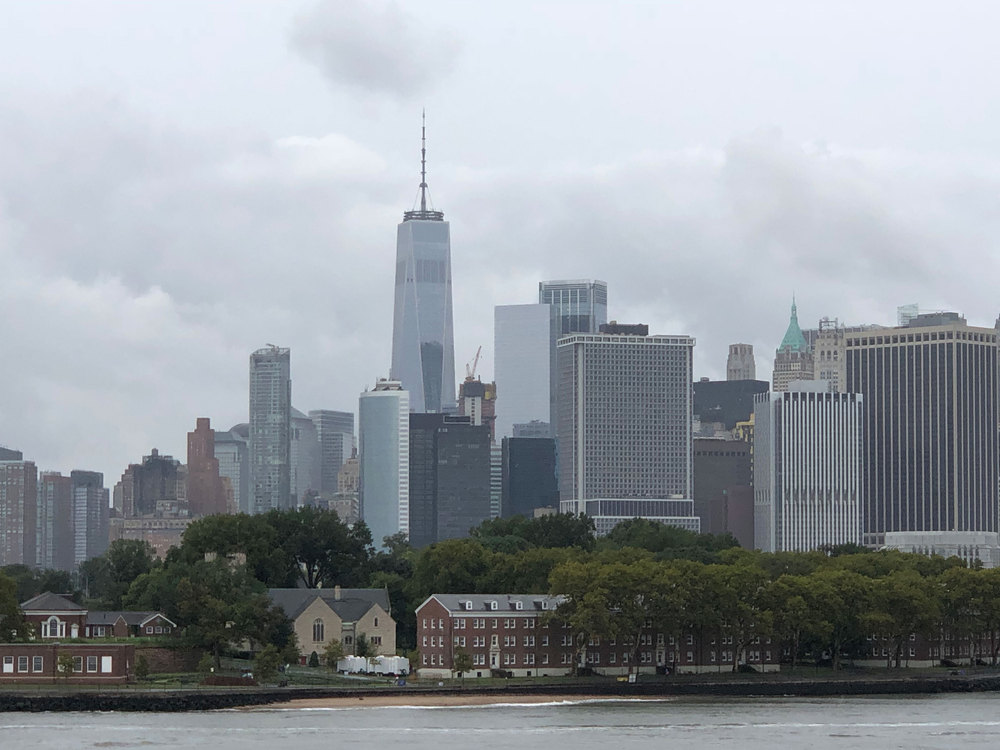 Say goodbye to New York on the QM2

(Scroll down for image gallery)

When I was asked would I like to fly to NYC, I couldn’t say yes fast enough, but then a catch was thrown in the mix... It was to travel back via the Queen Mary 2 (QM2), I almost choked and cried with hysterical laughter.

The thought of being at sea for seven days with no land in sight, no phone signal, no internet connection and nothing to do for that length of time, scared the living daylights out of me. It reminded me of the Titanic, as the QM2 would be taking almost the same route. Dramatic of me, I know but I was genuinely petrified.

Once I had calmed my nerves and someone mentioned I could bring back more than I initially travelled with on the plane, it was called: where do I sign up! 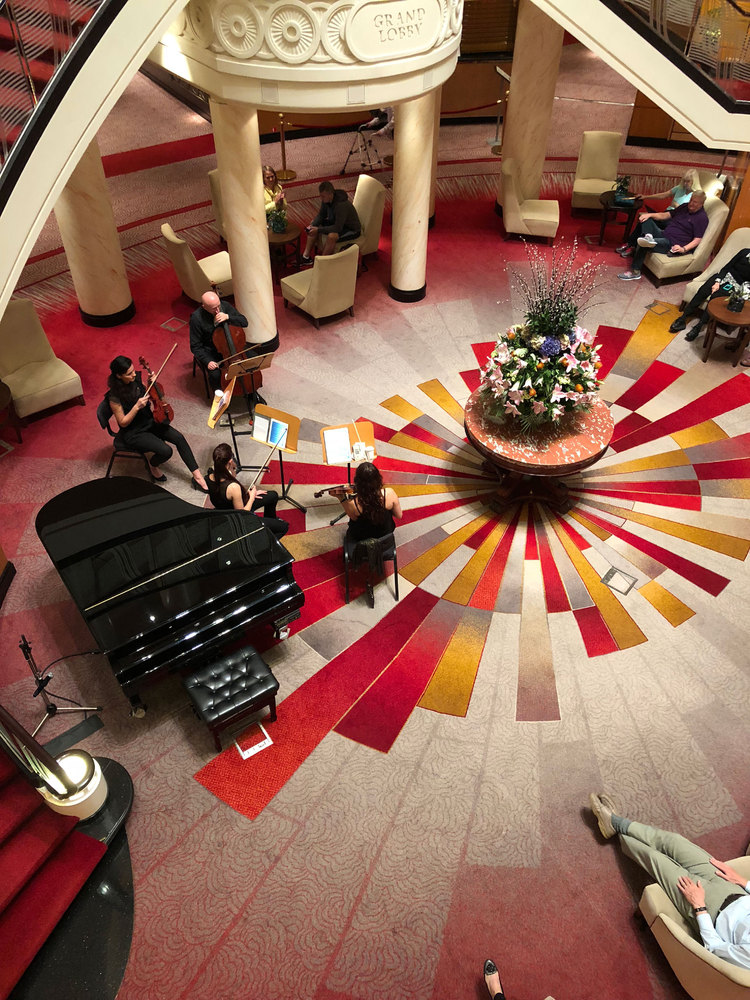 The Queen Mary 2 leaves Brooklyn Cruise terminal, New York and arrives in Southampton, England on the 7th day of the voyage. Therefore, you could sail to New York, spend two weeks and then return via ship – avoiding jet lag!

The QM2 boasts luxury throughout, with its decadent décor and soft furnishings, exuberating pure elegance and class. One of my concerns was that the ship was going to make me feel claustrophobic, but I needn’t have worried, as there was so much space to manoeuvre and I didn’t feel overcrowded. Had I not been told that the ship was filled to its capacity of 2,695 passengers and 1,253 officers and crew, I would have said it was empty.

What I found wonderful was, the QM2 boasts a large dog kennel for those who wish to travel with their four-legged friends. The pets are kept in their very own stylish quarters, where they are walked several times a day on their own deck, groomed, fed and petted. The owners can visit their loved ones as often as they wish. I almost kidnapped one pooch because I fell in love with it but thought better of it. LOL.

Upon boarding the QM2 I was welcomed by an array of staff in their traditional bell boy outfits and cruise liner uniforms, then guided to my cabin via the main foyer where talented musicians played classical music. Before entering my room, I was met by my assistant who looked after all my needs for the duration of the voyage. I was pleasantly surprised by a bottle of champagne on ice inside my room. Now that was a greeting!


Depending on budget, there is something to suit everyone’s taste from the Queen’s Grill Suites (private deck, own butler service, private dining and more) to the Britannia Inside cabins.
Not wanting to feel isolated or cooped up for seven days, I opted for a Britannia balcony cabin, where I could step outside the room and overlook the ship, feeling the cool breeze and spray of the Atlantic Ocean. I would definitely recommend this option, as I was not high enough to feel the sway and dips of the ocean waves (if the crossing is rough) including the high winds – which can cause the ultimate sea sickness for non-sea veterans.

Life on the Ocean Wave

Contrary to my previous opinion of thinking life at sea was going to be dull and boring, I was happily mistaken. For there was a plethora of things to do from watching the latest movies in the
screening room to shopping in the onboard mall or enjoying quiet time in the largest library at sea to a programme of daily lectures. I attended a hilarious talk by BBC broadcast journalist Derek Tedder, called ‘15 minutes of Fame.’

Cunard ships are famous for their Afternoon Tea – Now this was delicious and always jammed packed (pardon the pun). We sipped our tea from fine china cups, whilst being entertained by talented violinists and celloists. I also indulged in the Laurent-Perrier Tasting Flights. – I love champagne so there was no way, I was going to pass up this opportunity!

I also enjoyed the daily pub quizzes held in the QM2’s Golden Lion Pub. Now these quizzes were not for the novices, you had to really know your general trivia, hence why I joined a group of professional pub quizzers!

For the active, the ship offers various sports activities on the upper deck such as golf, jogging or power walking, a gym equipped with the latest machines and Yoga and Pilates classes in the Canyon Ranch Spa Club for an extra fee.

My favourite activities were of the dance variety. In the Queens Room, the largest ballroom at sea, the fantastic professional ballroom dancers took me and the other passengers through our paces of learning the Waltz, Cha Cha, Fox Trot, and the raunchy Rhumba. Thank heavens I used to be a professional dancer, so I could pick up the steps fairly quickly.

Line Dancing was another favourite. No longer the cliché of country and western songs, cowboy boots and Stetson hats, it’s much more evolved using up to date chart songs, with a combination of repetitive steps, turns and various directions, to engage the brain and muscle movement memory. The sessions were fun, full of laughter and meeting new people.

However, foil fencing was my dream come true and thanks to the Cunard for facilitating it. Fencing was held over two sessions per week, with instruction from the very strict Richard. Part A entailed going through the technical terms and movements before being let loose on the equipment and foil to actually duel with various partners in Part B. This was the real fun because some of these fencers took it very seriously. Oh, that was me, LOL. Thanks to Richard, he made the sessions entertaining and has inspired me to continue to learn to fence.

On three evenings during the week, the Cunard hosted a Gala Ball, requiring formal dress, a good excuse to pack a ball gown or dinner jacket. The Captain’s Ball was hosted by Captain Peter Philpott, who retired after this voyage, so his party went off with a bang, with the live Cunard orchestra and the fabulous soulful Cunard band singers. Not forgetting the professional dancers who performed their version of ‘Strictly Come Dancing’ at one of the Gala evenings. The Roaring Twenties’ Ball was a real step back in time thanks to the fabulous costumes, music and décor, while the Britannia Ball celebrated all things British.

The onboard theatre hosted a range of professional dance performances, comedians, ventriloquists, and Violinist, performing twice a night, so if we missed the start of one show, we could watch it live an hour or so later. For the night owls, the G32 Night Club rivalled any London nightclub, with DJ Nick spinning tunes until 3am – we tested his skills and knowledge with our requests!

What I did not expect to find was Winston Churchill’s Smoking Room. This was a real treat and a fun place to visit, as I met so many different people, who shared the love of indulging in a cigar every now and then. Sheldon, the Smoking Room ambassador, was really the connoisseur for recommending a cigar to smoke and the perfect drink to accompany it. He ensured the best service by lighting our cigars and telling us the background to the cigars we were smoking.

Cruising is, of course, renowned for food and drink and the QM2 offers various restaurants, bars and lounges. Your cabin dictates which is your main dining room, from the Queen’s Grill to the Britannia Restaurant, all offering varied menu choices. A highlight for me was receiving an official invitation to dine at the Chief Engineer’s table, it was a great experience. Maybe next time, I’ll dine at the Captain’s table, now that would be lovely.

There are also informal dining options open to all, plus the Sir Samuel’s chocolate bar, plus the Commodore Club for cocktails and of course the Champagne Bar.

Is the Cunard QM2 a worthwhile experience? I would say it gets a 10/10 from me. There was never a day that I was bored: my daily itinerary was action-packed from the moment I awoke to the time I hit the sack. It is a ‘must do’ trip.

Is it value for money? Most certainly! Book direct through Cunard and you’re sure to pick up a bargain, depending on your date of travel. Approximate costs for a seven-day voyage based on two persons, including economy flights, are £2700 for a sheltered balcony suite. Whatever your budget, this is a once in a lifetime trip.

If you've been on the QM2, then share your experiences with NDY below.

Fencing on the QM2

Line dancing on the QM2