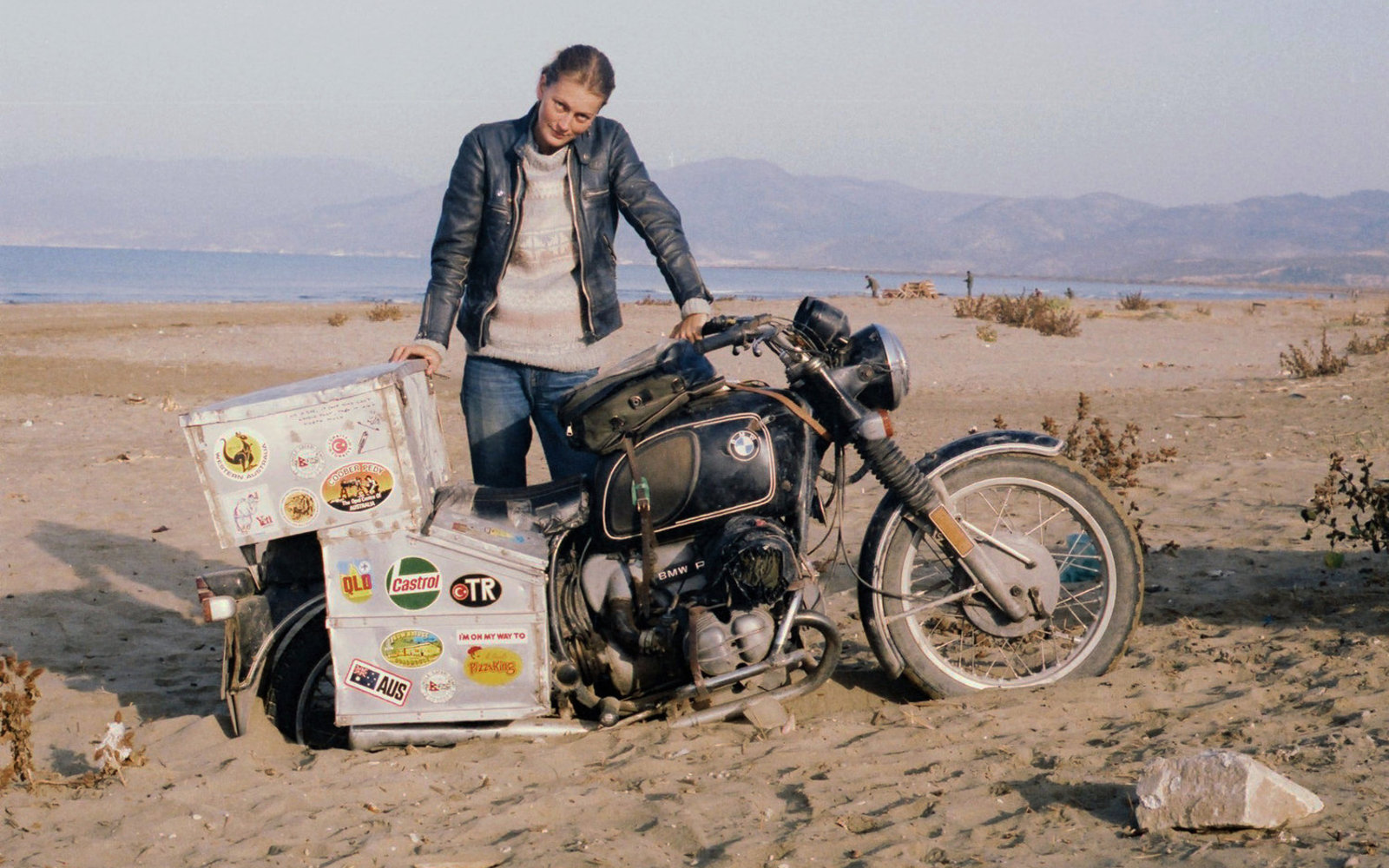 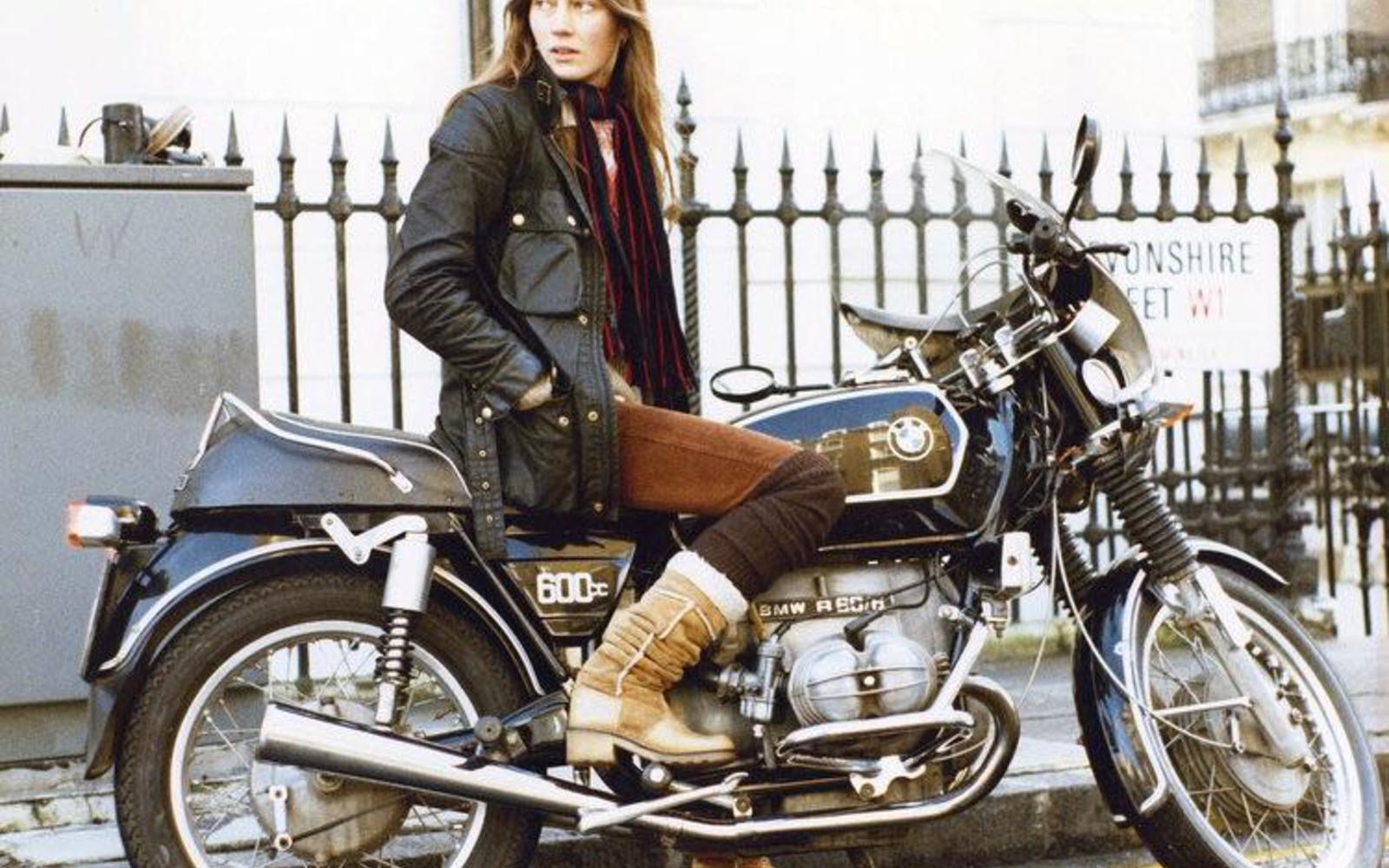 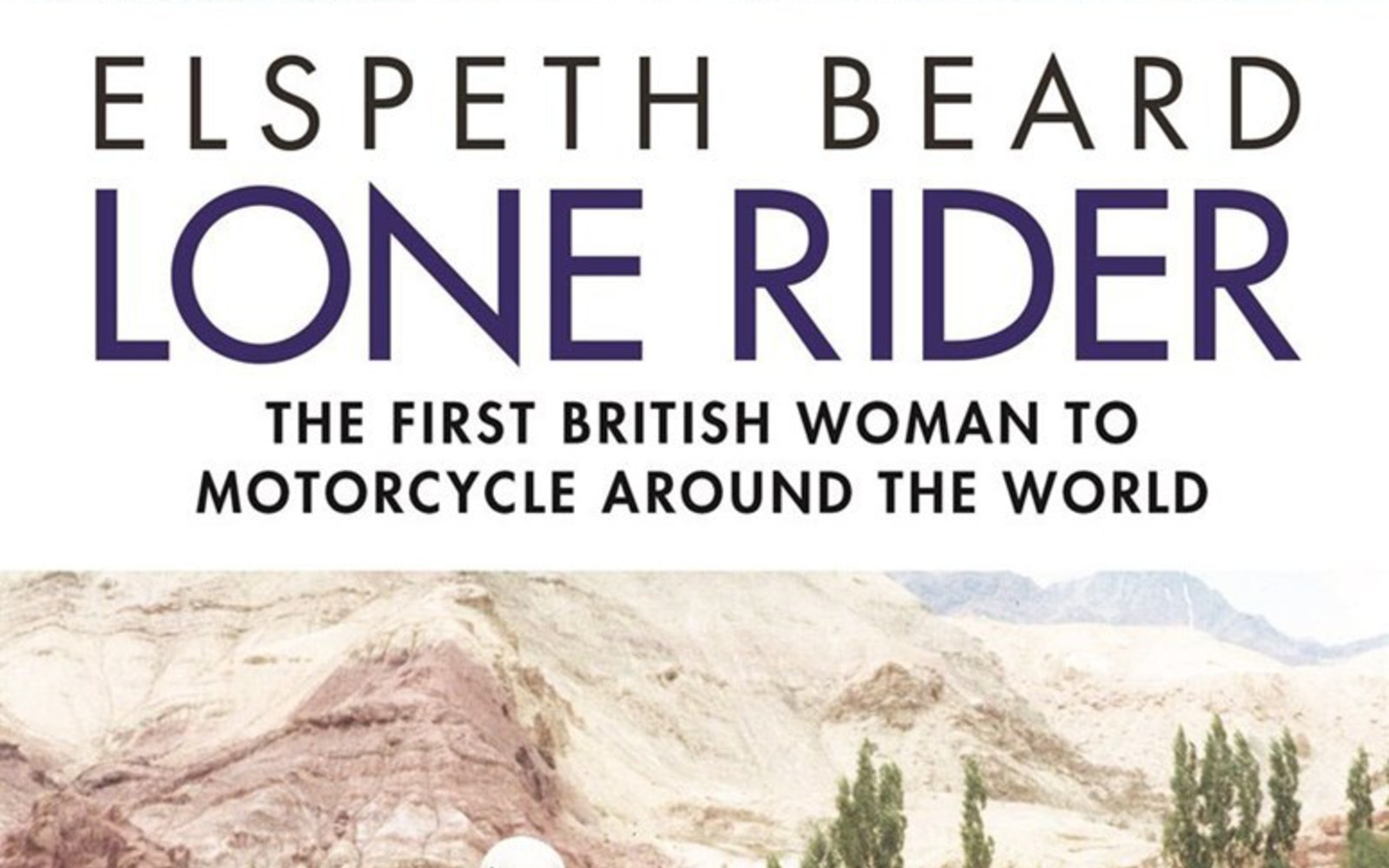 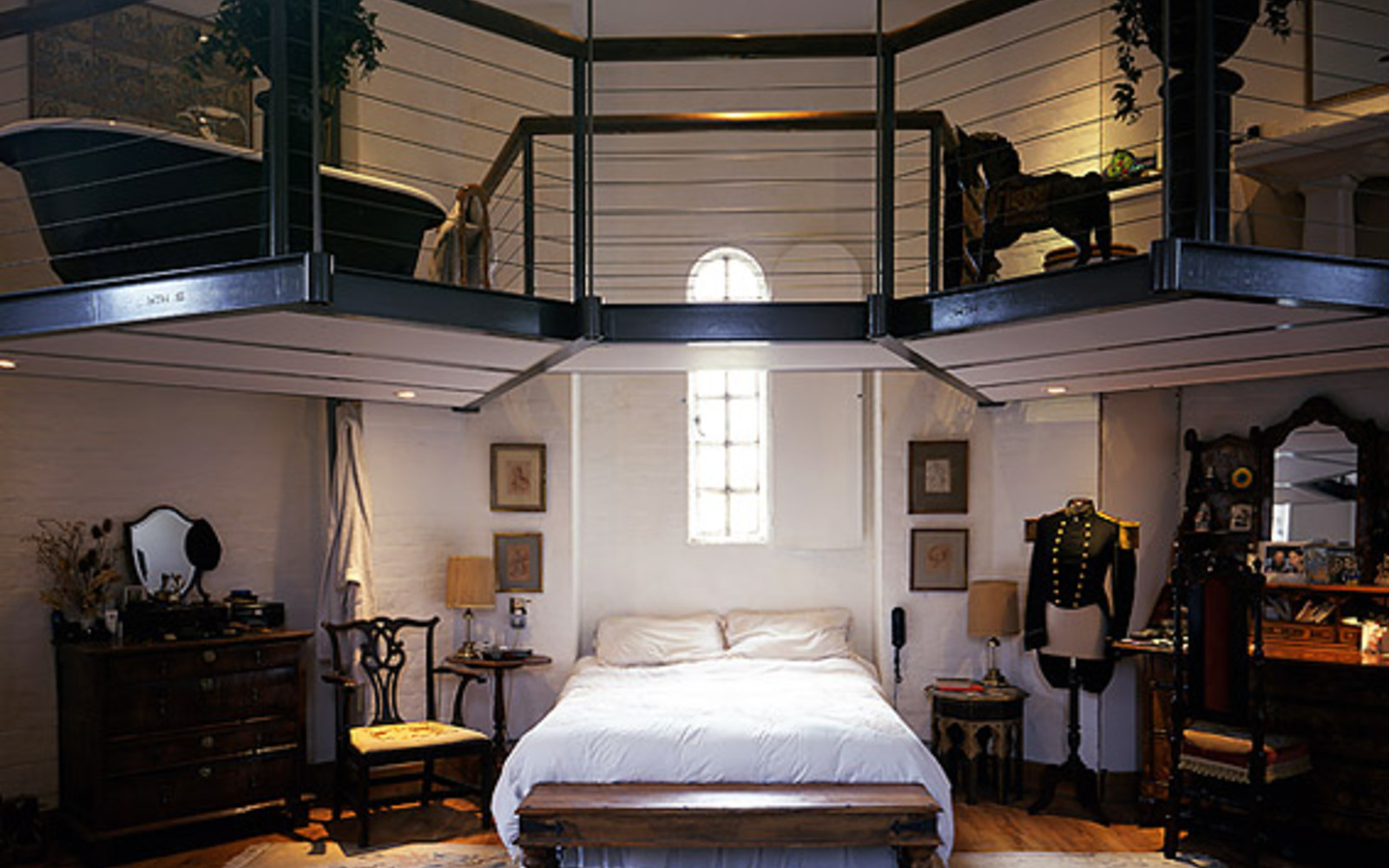 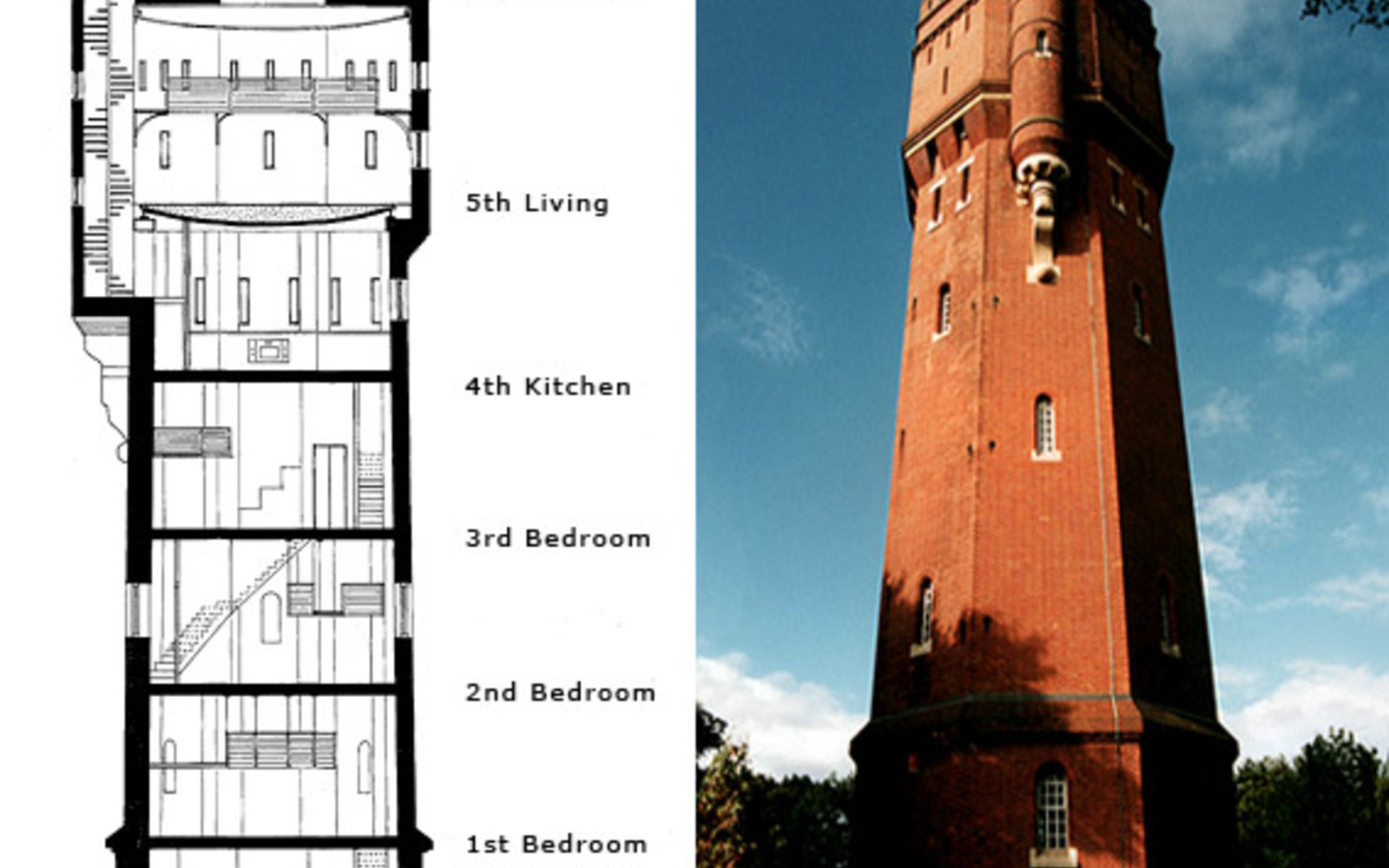 Elspeth Beard….Girl on a Motorcycle

Elspeth Beard is quite simply an inspiration.

An award-winning architect with her own practice in Godalming she has picked up many accolades, particularly for her conversion of the Munstead water tower into a six-storey home. When NDY met her in her Godalming office she was flying off later that day to Piedmont to oversee her latest project, the ‘nightmare’ restoration of a classic Italian country villa.

However, that’s not the whole story: Elspeth has another claim to fame – she was the first British women to motorcycle around the world – at the age of 23 back in 1982 when female bikers were in the minority and treated somewhat as a joke, and there was no smartphone or GPS to help her find her route.

The voyage took more than two years and covered 35,000 miles and four continents. It was prompted by the break-up of a relationship and was often a journey into the unknown; no sat-nav or internet to guide her, no sponsorship or even support from the motorbike community. Her bike wore home-made panniers and was prepared for the trip by Elspeth with just the help of a Haynes manual.

The epic tour of four continents (the USA, Australasia, Asia and Europe) threw many challenges her way; from robbery and sexual assault to floods and desert conditions, to baffling bureaucracy and most seriously, surviving two nasty accidents which left her and her beloved 1974 BMW R60/6 battle-scarred.

Although not surprisingly Elspeth looks back on the adventure as life-changing and today is rightly lauded for her achievement which is the subject of her self-penned book ‘Lone Rider’ published in 2017, she said that she played it down for over 30 years. 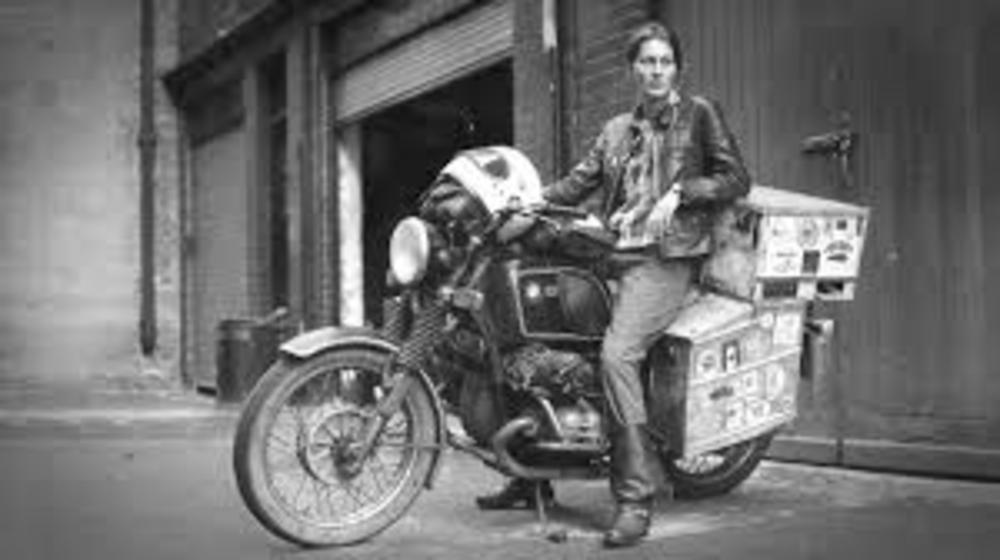 NDY asked her about the book, the adventure and her view of mid-life bikers!

NDY Elspeth, the book is unputdownable, but why did it take you 35 years to get around to writing it?

No one was interested at the time – I contacted the bike press [who refused to support her, preferring to mock her in a sexist letter]. This was the early 1980s and my family and friends simply didn’t understand. When I came back, I was completely changed.

I pushed it to one side in my mind. I didn’t think about it until 2008, when a friend was asked to write an article about me, it was picked up on the Internet and the story just spread.

In 2014 I was contacted by an agent from Hollywood. That made me realise people were interested. The popularity of motorbike adventures has exploded particularly since Charley Boorman and Ewan McGregor’s trip ‘Long Way Round’.

But I wanted to tell my own story first, so I wrote the book – and rewrote it 25 times! - which took two and a half years.

What is your strongest memory of the trip?

There are so many! I’ve thought a lot about the highs and lows – particularly the accidents [the first encountering a huge pothole in the Australian Outback and the second hitting a dog in Thailand] and Robert [a Dutch BMW biker whom she met in Nepal and then fell in love and completed the rest of her journey with.

In writing the book, I realised that the trip made me the person I am. I’m not afraid to take on things in life. It also made me deal with my Mother’s attitude [her view of her trip was that it was ‘dangerous and completely unnecessary’]. It was a cathartic experience.

But as a mother myself now, I can understand her worry. Maybe it was her way of dealing with it. She’s of a different generation.

Have attitudes changed both towards your trip and women bikers in general?

The motorcycle industry’s attitude towards women has changed. They now make bikes and gear for women [Elspeth had to borrow safety gear from male biker friends]. Now they have a new market of bikers they can sell to!

Would you want to do the trip now with the support of technology?


I’m glad I did it when I did. It really was an adventure. I knew nothing and so I was forced to learn all sorts of things. All the technology is great. It helps and encourages comfort where you can buy petrol etc but trips can be quite boring now. People plan everything, nothing is left to chance. They follow the red line on the GPS and don’t stray from it. A real journey, a real adventure is enrichened by the experiences you have when things go wrong – and how you deal with them.

Your adventure is the stuff of most people’s bucket lists – what is on yours?

I don’t think like that. For example, I bought the Italian villa on a whim. I let life take me. But you have to be open minded and you have to have courage and not be deterred where your perhaps crazy decisions may lead you. In Italy, I met new people and I’m hoping to start motorbike tours there.

I still do trips. I was in Pakistan last year, with a group of other women. Next year, I’m leading a group in Tajikistan.

What do you think of midlife adventurers and bikers?


It’s brilliant! But there are people who learned on a Norton years ago and then buy a big bike that they can’t handle! I feel that I’ve evolved with the all the changes in bikes. Biking keeps you young at heart!

I still own BMW bikes; I have an R80 GS and I still have my old my R60, and I still ride her! But no big trips for her now, she’s earned some rest, she has done 100,000 miles (including the world tour), quite a lot for a motorcycle of her age!

Any tips for novice would be bikers?

When you are starting out don’t be too ambitious in the size of bike. I started with a 100cc Yamaha and rode it for a year. Then I moved up. You should build your confidence slowly.
Do some off-roading on green lanes, go at your own pace, but keep moving forward.

For women, girls’ only tours are really good. I did a five-day all-woman in France. We all had confidence in each other. There was no competition, we all helped each other.

Are you prouder of your trip or your architecture career?

Both…in different ways. I am proud of the water tower. That took seven years of my life – the trip was only two. In some ways I believe one would not have happened without the other. The trip gave me the courage to do the water tower, which encouraged me to open up my own practice. It’s about being open to change and new things!

What is happening with the film?


It’s in discussions. It’s really difficult to find someone to build with me…I want some control – film makers actually prefer it when the subject – me in this case - is dead!