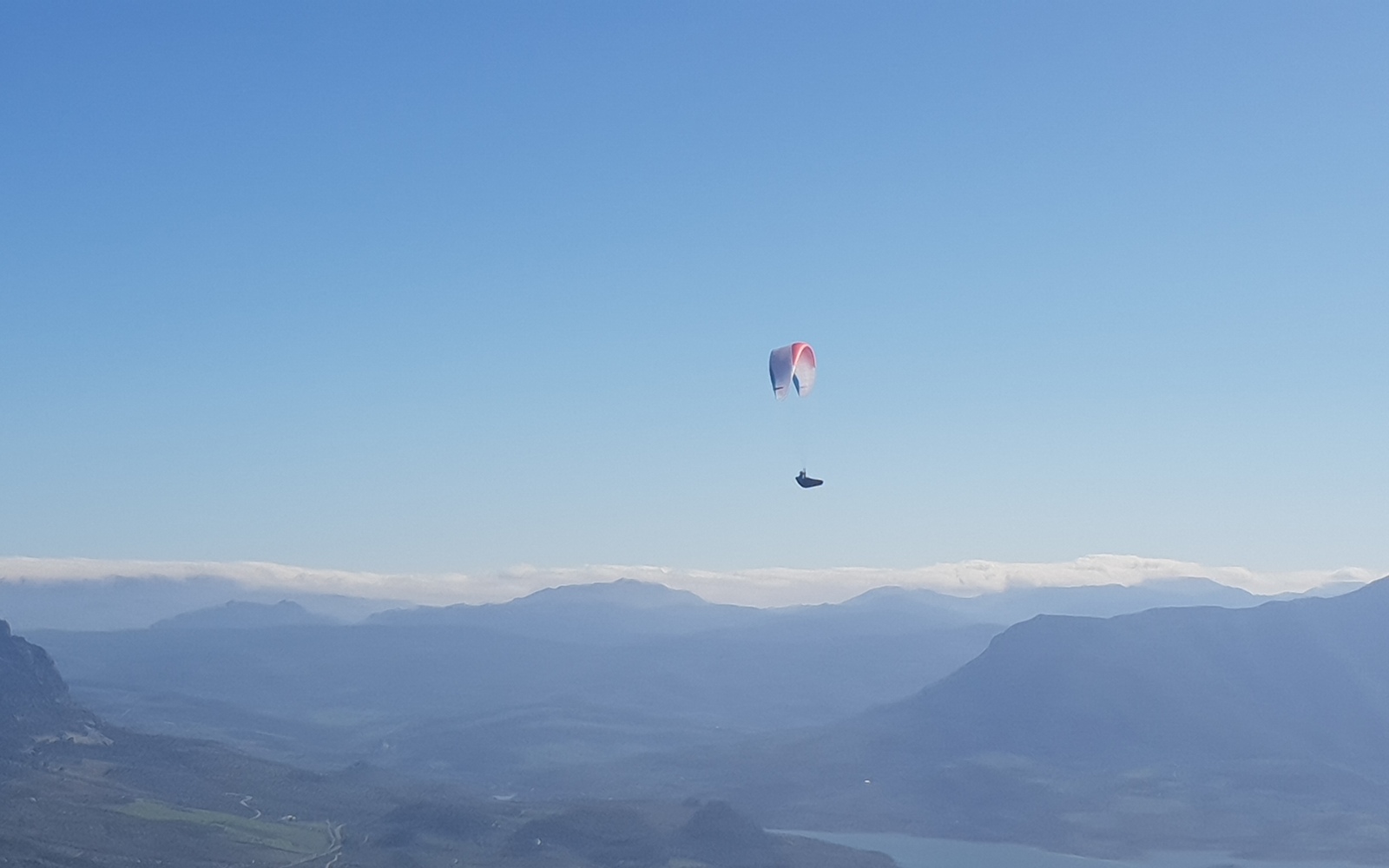 Up up and away in the distance 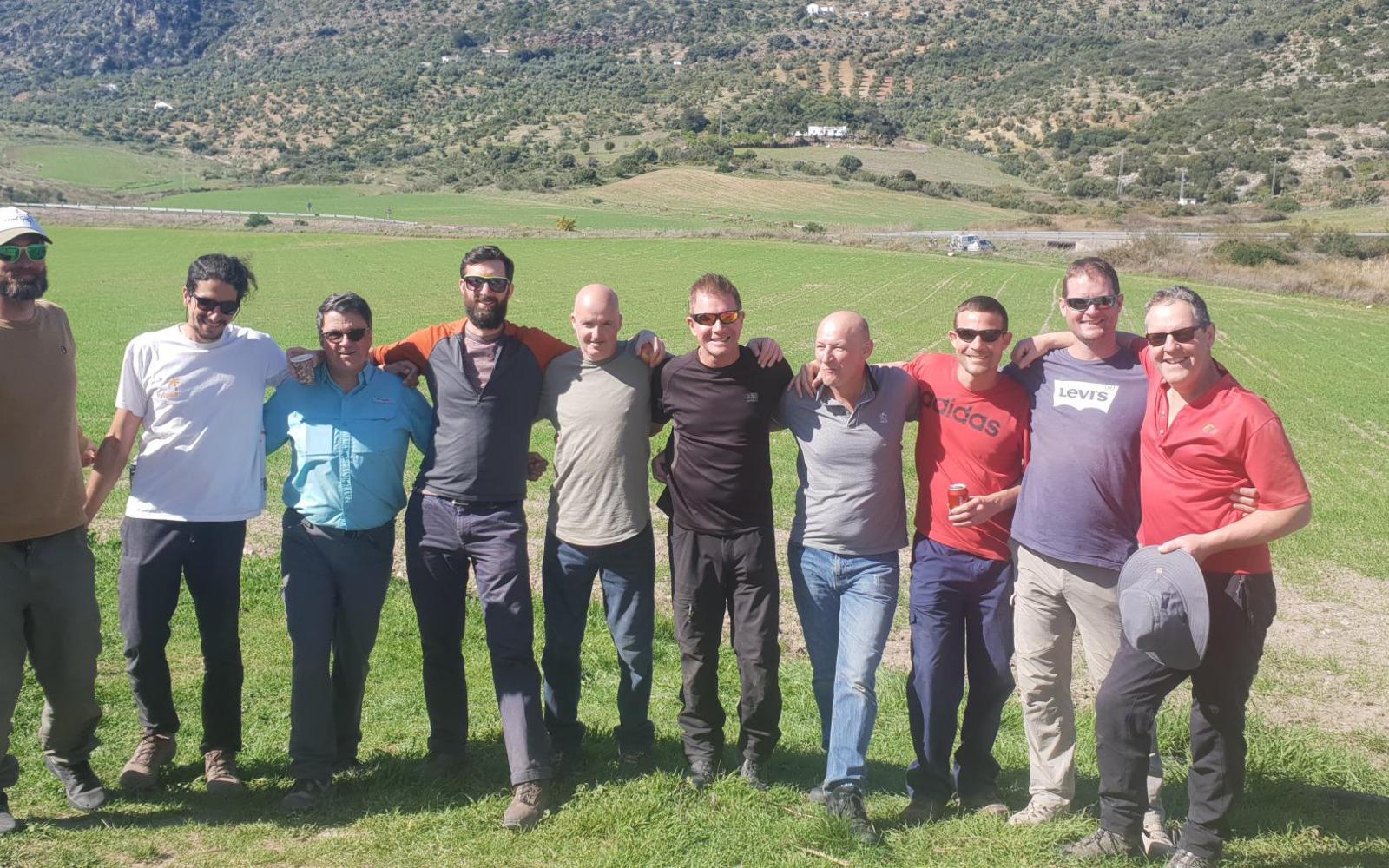 Do you ever find yourself in a bad place or situation, and you think, “how the hell did I ever end up here?”. Usually it’s on a dirty beach in a busy resort, or at your desk working in a dead-end job for a company you detest. Well for me, the lightbulb moment came at 2,500 feet above the Spanish countryside, suspended from a fluorescent piece of shopping bag material, sitting in a canvas bag with only a handful of thin cords preventing me from plummeting to the ground. As I was buffeted by high winds and thermal air that felt like I was riding an express elevator up AND down at the same time, my mind questioned the decision to take up the sport of paragliding at the age of 54.
Paragliding is a sport that’s only been around for less than 30 years; it is practiced all over the world, and statistically is less dangerous than horse-riding (and considerably less dangerous than knitting). 10 people in 10,000 die horse-riding, 7 in 10,000 paragliding, but astonishingly 30 people per 10,000 die knitting each year! But you’re not dead yet, pardon the pun. Not only is paragliding popular in the UK, but UK approved training centres exist in southern Spain.

On a dull rainy day, I had the wild thought of taking off to Andalucia to find out more about this intriguing sport. Having only recently returned to the UK after living 25 years in Australia, and looking for some activity to occupy me, my wife instantly recognised the benefits of me taking up the sport. “Book it”, she said “Go. Go with my blessing!”. 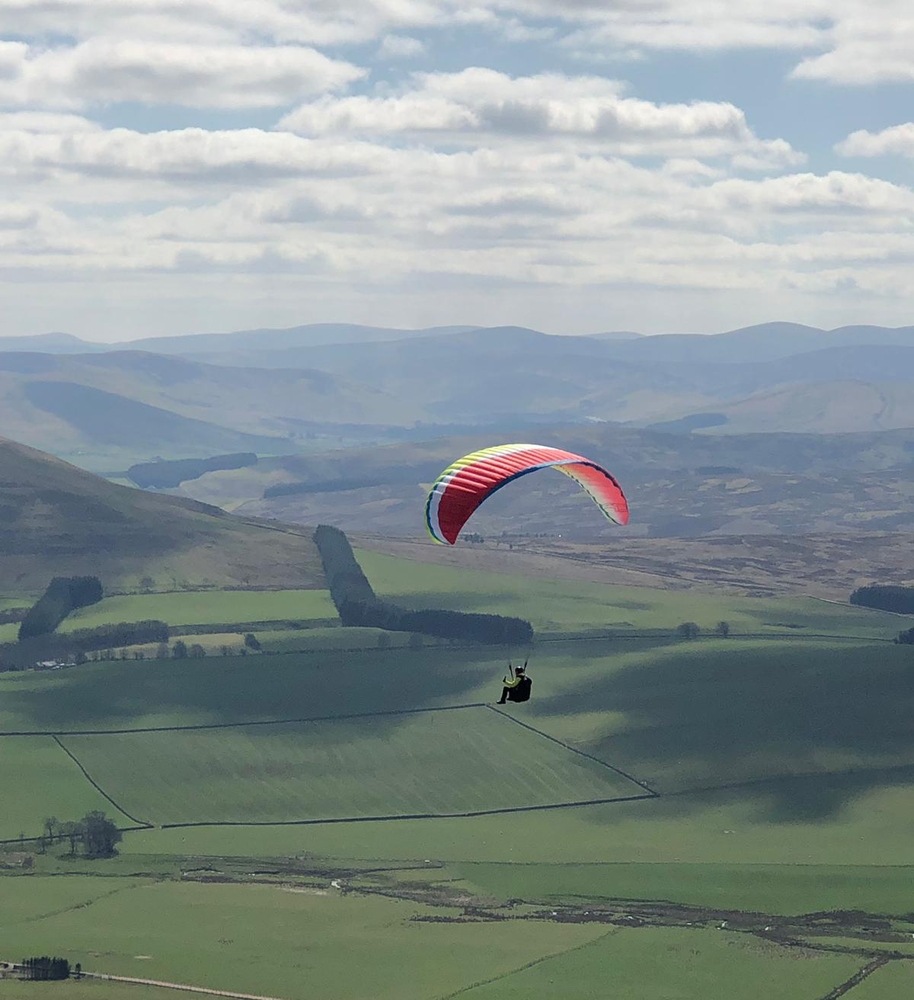 So, 3 weeks later I joined 7 other people from all over the UK and different professions to begin our elementary training in Paragliding.
What is paragliding? For those of you who don’t know; it involves the “wing” which is basically an inflatable plastic bag that resembles a parachute more than anything else. In fact, in the early days, parachutes with steering devices were used by people launching themselves off cliffs or mountains and flying to the bottom. The pilot sits in a basic harness similar to those used in rock climbing or abseiling. Flight is achieved by using wind, or thermal air which rises in invisible bubbles, similar to those in a lava lamp. Skilled pilots can use these to fly distances of over 200km at heights up to 10,000 feet.

However, in our beginners’ group, we were only allowed to make short “hops” down a gently sloping hill for the first 3 days. Flights lasting between 30 seconds and 2 minutes were all that we practiced, and after 3 days, we’d completed about 25 of these little forays into the sky. At the end of the 3rd day, we were driven to another field some 20km away, and given some information about landing in such a place – wind direction, obstacles, nearest hospital etc. Once we’d indicated that we understood, we were driven 45 minutes to the top of a 2,000-foot hill, which we’d failed to spot previously in the backgound to our “landing zone”. “Off you go then”, said our instructor. “You’ve seen the field, now go land in it”. “But we haven’t got any reserve parachutes”, we protested. (A reserve parachute is held under your seat and is deployed if and when you get into difficulty – an possibility we all envisaged given our basic training and the fact we were about to launch off this massive mountain). “You won’t need one”, we were told. “For two reasons – Firstly, you don’t know HOW to use them, and secondly, the conditions are so mild, you won’t NEED to use them”.
Glancing around at the other “professional” pilots, who were taking off (ALL of whom it must be said HAD reserve parachutes, a new phrase was born within the group. “PCF”, or Post Coital Foreplay - Indicating something that is done completely the wrong way around. And so it proved – our parachutes were fitted the following day, after which we were given instruction in their use!
I digress, and several minutes later, I found myself running at full tilt towards the cliff edge, with my wing billowing above me, suddenly to be lifted high into the air and watching the ground fall far away below me. I’d love to say this was exhilarating; however, my only emotion was raw terror. I began to question the sanity of my doing this. Forgetting almost everything I’d been taught, I somehow managed to get myself down to the landing field 2,000 feet below. With varying degrees of success, the rest of the group did the same, and the congratulatory hugs and high-fives were born of exultation and relief. We all bonded in that moment, sharing probably the most terrifying yet satisfying moment of our lives. The poor weather meant that we were unable to repeat the flight, causing my comrades and I to go our separate ways.

I had decided to stay another week to complete my Club Pilot rating, which is effectively just the same as passing your driving test. Yes, I was qualified, but in reality, I was just the same as every new driver – licence in hand, but totally unprepared to drive on the roads. So, the second week involved longer and higher flights and even written theory exams, that had to be passed to gain my licence. My confidence increased to such an extent, that on my last day in Spain, with the course finished and completely on my own, I launched from exactly the same mountain as we’d done 10 days before. This time however, I was able to enjoy the 90 minute flight, soaring until the sun set, then landing perfectly in front of 100 other paraglider pilots, who were enjoying a cold beer and watching the last few landing of the day. I gathered my wing and walked off as if I’d done it a million times. And no-one suspected that my heart was almost bursting out my chest!
I purchased all the kit I needed in Spain and have flown several times in Scotland. The paragliding community is full of friendly and helpful people. I am in regular contact with my fellow students, and we will be flying together again this summer. I can’t recommend this sport highly enough. Yes, it carries some risk, but as in all things, risks are reduced with proper planning, training and practice. At least it’s not as dangerous as horse-riding. I made up the knitting statistics, but I wonder if you Googled that before finishing this article!